The first of a line of chimney sweeps, Stephen was born in 1829 and baptised at St Nicholas Church, Brighton 20th Sept 1829.  The son of William Wadey (1764-1828) and Hannah Burstow (1790-1856).  Unfortunately William died before Stephen was born which left Hannah to bring up Thomas (1827-1854) and Stephen alone in Circus Street, Brighton, a street that will continue to be prominent  in the Wadey story until the compulsory purchase and demolition of it to make way for the municipal fruit and veg market in 1934.

At the age of 15 Stephen was living in Lewis Buildings, Brighton (off Ship St) and plying his trade as a chimney sweep.  Stephen married Mary Ann Johnson (1830-1876) on 15th June 1851 at St Nicholas Church, Brighton, the daughter of Robert Johnson and Mary Sheppard Lewry, the marriage was witnessed by Robert Johnson (Mary Ann’s father) and Lucy Wadey (Stephen’s brother Thomas’ wife).  They started their married life at Clarence Yard, Brighton (Eastern part of The Lanes).  By the 1851 census Stephen is now shown as a Master Sweep with 2 men working for him. 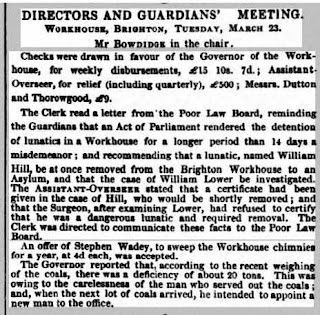 Stephen must have been quite the entrepreneur having managed to agree a contract with the Church Hill Workhouse guardians to sweep all the workhouse chimneys for a year at 4d each in 1852. 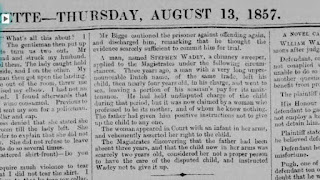 Stephen was not a stranger to the local courts, after the accident to Thomas he was a witness as he had crossed East Street with the 2 year old when he was hit.  4 years earlier he was in court in regard to a child that was left in his care. The local paper reported it

Stephens wife Mary died in 1876 at the age of 47 leaving Stephen with Emma then only 3 to care for, Mary (17) and Hannah (12) were still living with him in 1881 so you would imagine that the care of the little sister would have fallen to them as by that time all 3 boys were working, Henry and William as chimney sweeps, Mary is showing on the census as a needlewoman.   Stephen continued living in Circus street and working as a chimney sweep building up the business, buying 8 and  8a Circus Street in 1900 for £475, so by the time of his death he owned a stable, coal store, properties in Circus Court and 6, 7, 8 and 8a Circus Street.  Not bad for a lad that started his life without a father, his mother Hannah must have been a very strong woman.